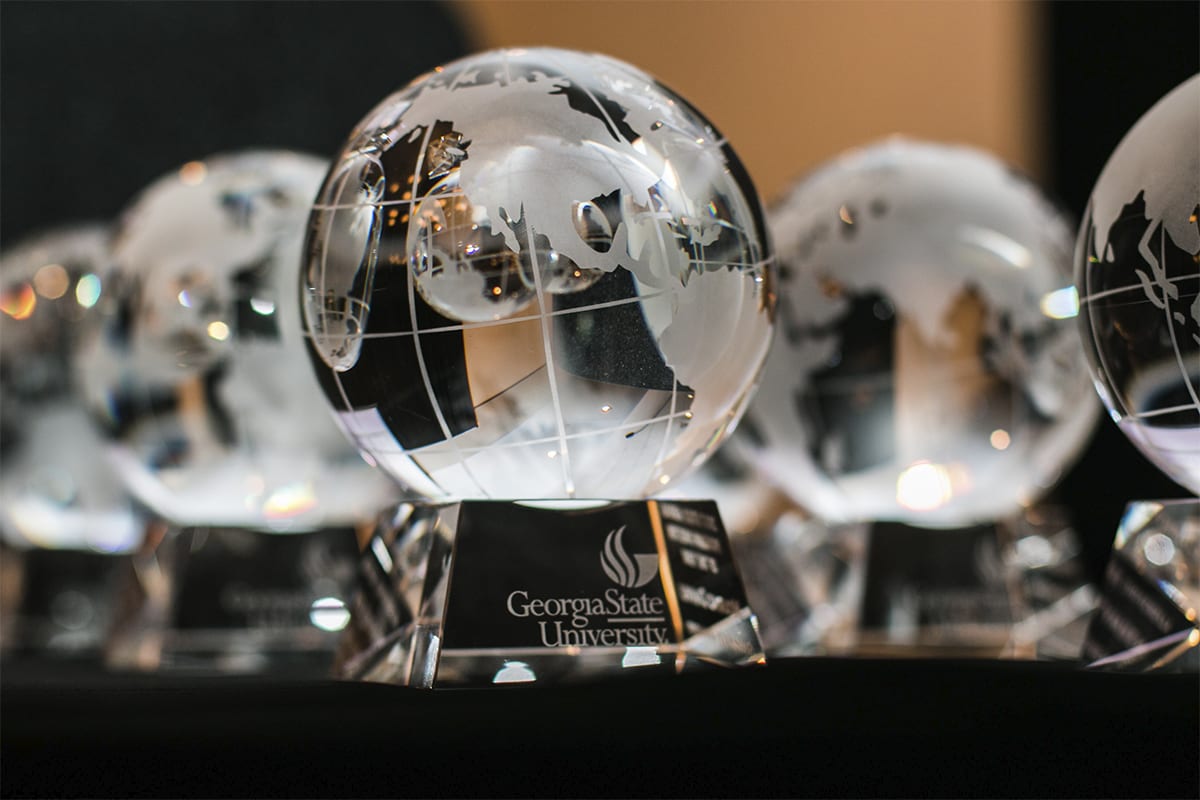 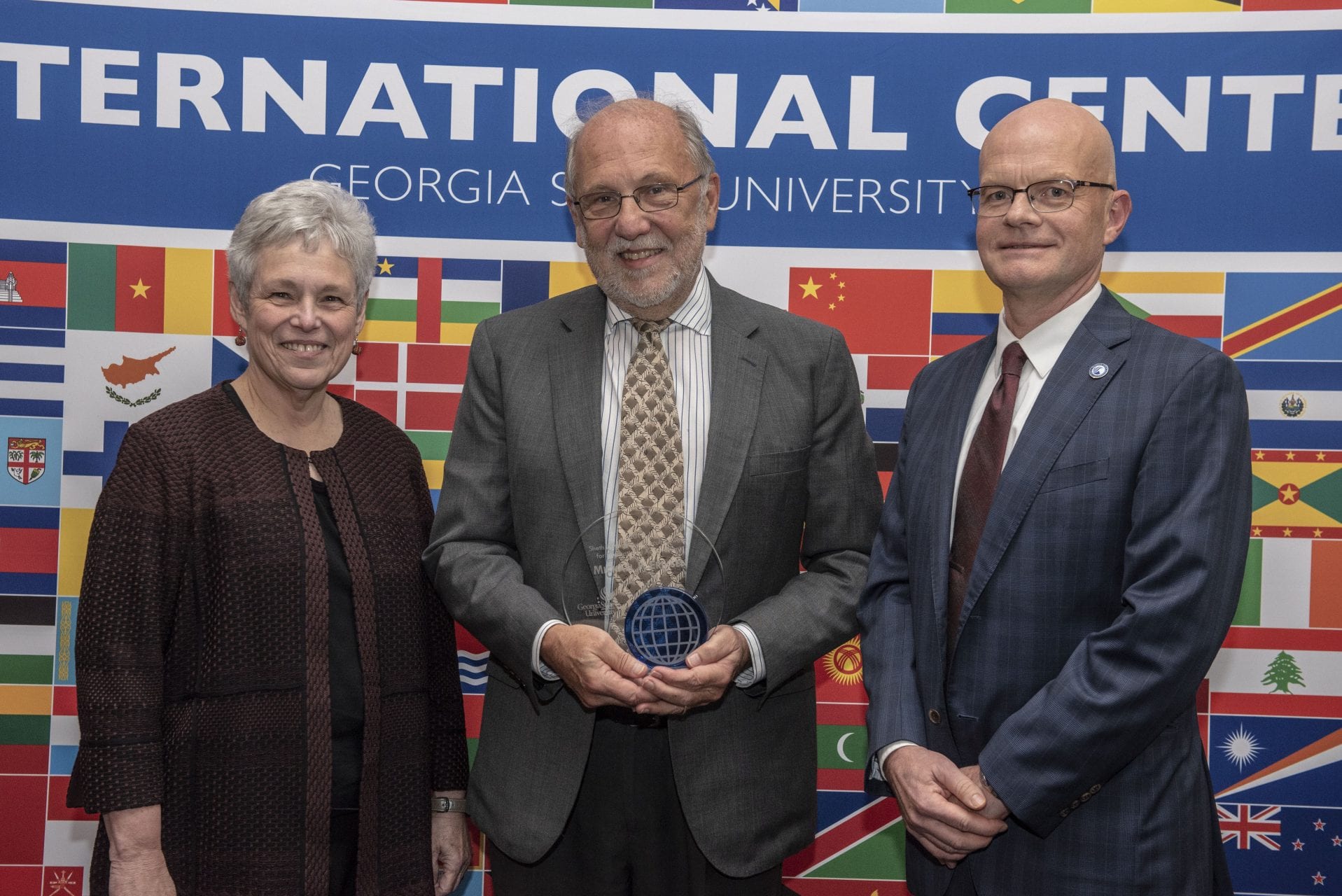 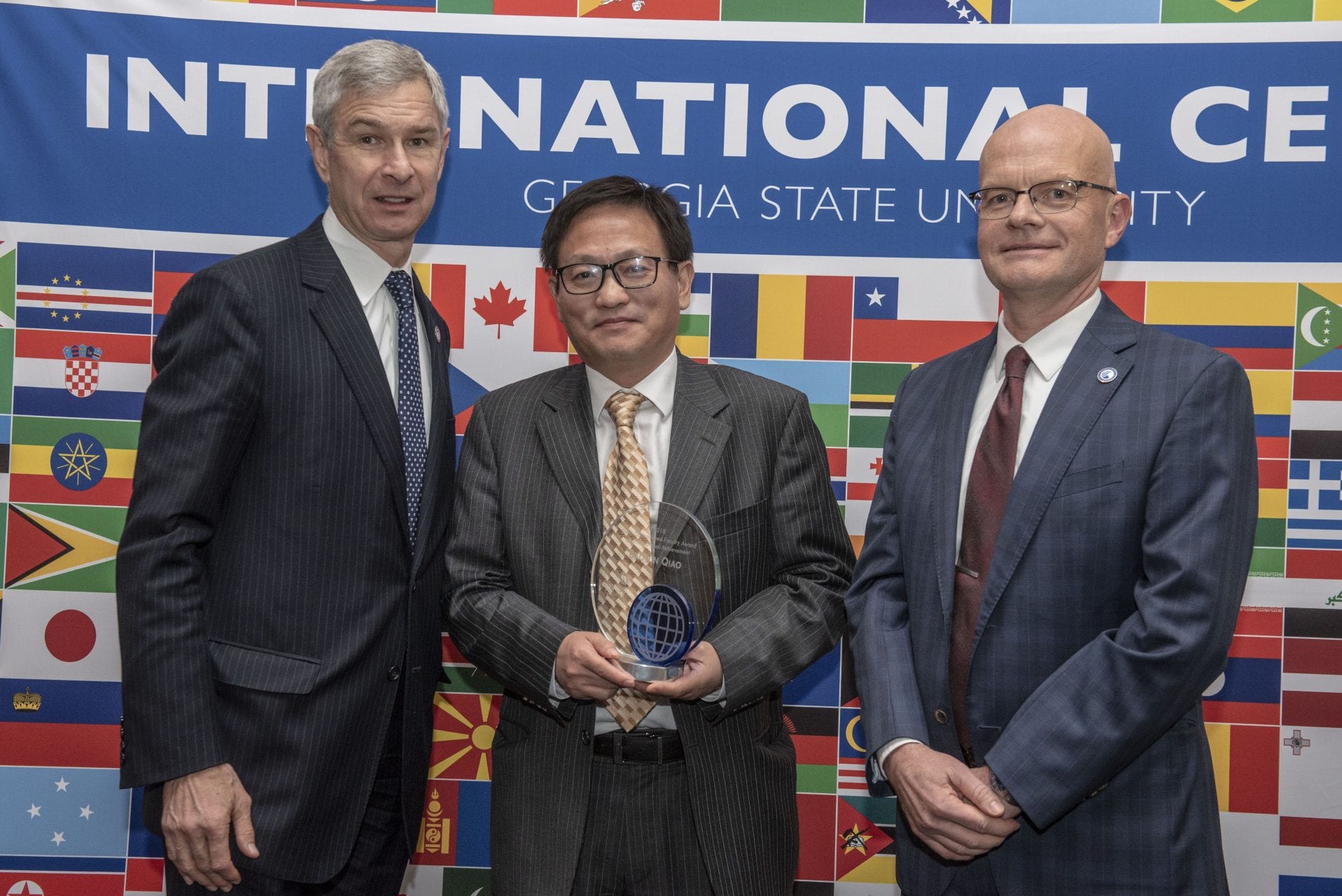 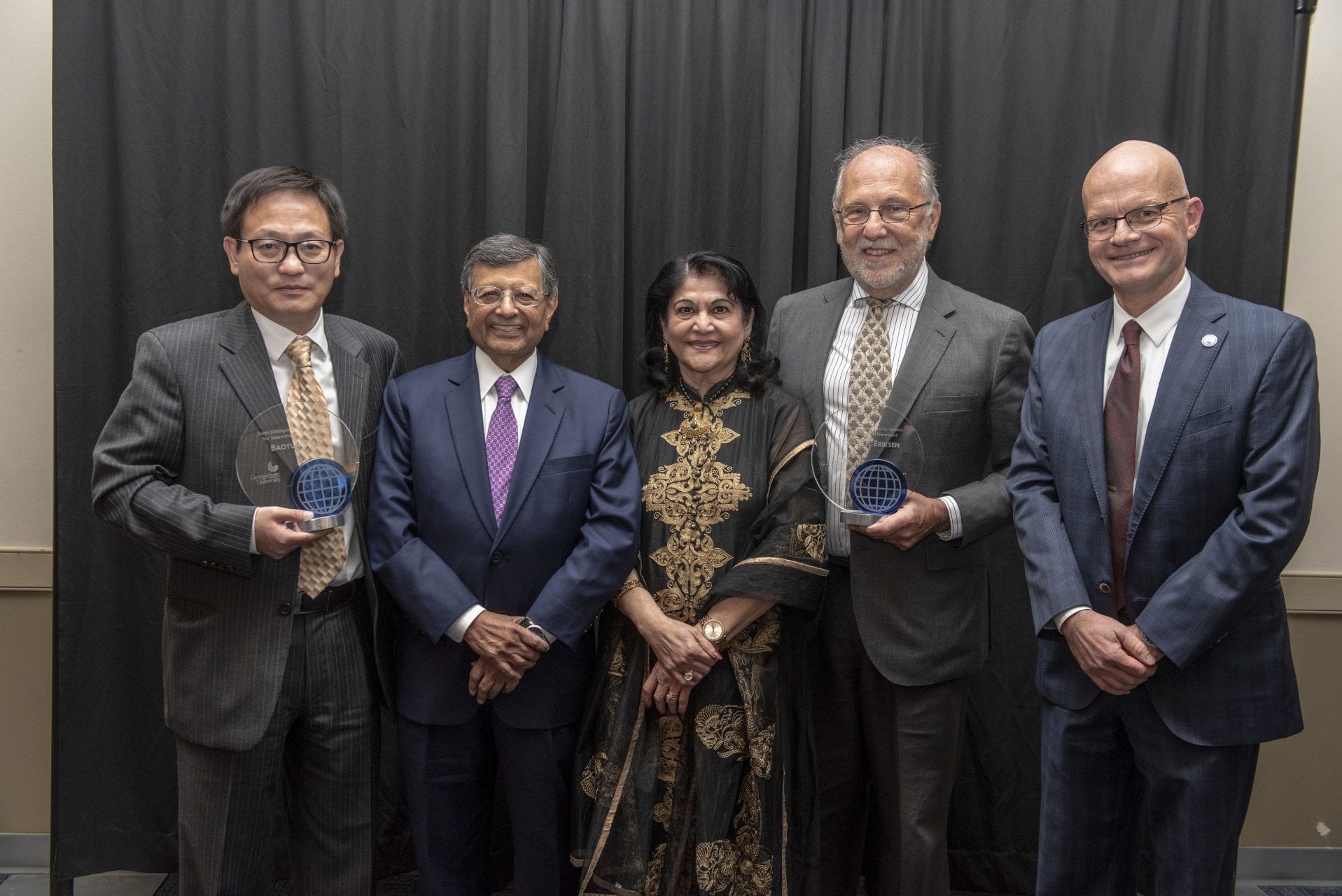 Georgia State University is proud of its global champions: the faculty, staff, students, and alumni who embody what it means to be a global citizen and who work to advance international understanding across campus and around the globe.

In 2012, Georgia State University began recognizing exemplary faculty, staff, international students, and study abroad students for their commitment to international education.  In 2018, the Sheth Awards were established to recognize one distinguished faculty member and one exceptional international alumnus or alumnae for their achievements.

Dr. Monica Swahn is a Distinguished University Professor in the department of Population Health Sciences in the School of Public Health and a core faculty in the Partnership for Urban Health Research. Her main research areas pertain to health risk behaviors among adolescents and young adults, primarily focusing on the structural drivers of alcohol, violence and HIV/AIDS in the United States and globally.

She is a Fulbright Scholar for the sub-Saharan HIV program and assigned to the School of Public Health at Makerere University, Uganda (2016-2018), to develop and implement an alcohol research center to serve Eastern Africa. She is the Associate Director for Research for the Injury Prevention Research Center at Emory, a regional consortium of researchers and practitioners in injury prevention.

Current research activities include examining the role of alcohol policies in homicide and suicide in the U.S., the structural drivers of sexual violence perpetration among freshmen in the state of Georgia, and the development of a social norms campaign to reduce and delay underage drinking and alcohol-related HIV transmissions among vulnerable youth in Uganda. She has presented her research on the integration of Alcohol Use, Gender-Based Violence and HIV to the Commission on the Status of Women at the United Nations (2014 & 2015). She is a consultant to the United Nations Development Program/World Health Organization on the integration of Alcohol, Violence and Infectious Diseases in policy development in sub-Saharan Africa.

Swahn is the former Associate Vice President for Research for Georgia State University (2011-2014) and former Associate Dean for Research for the College of Health and Human Sciences, 2008-2011. Previous consultancies have been to the World Health Organization’s Africa Office on alcohol marketing in sub-Saharan Africa and on gender-based violence to the Pan American Health Organization in Guyana. Prior to joining Georgia State, Swahn worked for the Centers for Disease Control and Prevention for 10 years.

Dr. Aries Arugay completed his Ph.D. in Political Science from the College of Arts and Sciences in 2014. He’s made a significant impact on university education in the Philippines, modernizing the curriculum in his own department, and receiving recognition through several teaching and research awards. These include the Centennial Professorial Chair Award (2015-2018) and the One UP Professorial Chair for Excellence in Teaching and Research in Comparative Democratization (2016-2018 and 2019-2021). He’s currently the only Filipino political scientist that specializes in Latin American politics based in the Philippines. And he’s Co-convener of the Strategic Studies Program of the Center for Integrative and Development Studies at the University of the Philippines in Diliman.

He is involved in track-two diplomacy as a fellow of several Philippine-based think tanks. He served as Executive Director of the Institute for Strategic and Development Studies, Inc. and is currently a fellow of the Asia-Pacific Pathways to Progress Foundation, Inc. He has provided policy advice for different international track-two organizations such as the ASEAN Institutes for Strategic and International Studies and the Council for Security Cooperation in the Asia Pacific.

Dr. Fromherz is a unique scholar and prolific author dedicated to blending historical research about the Mediterranean, Middle East and North Africa with modern applications on a global scale. ​

He serves as the Senior Editor for the Oxford Research Encyclopedia for Africa and as President of the American Institute for Maghrib Studies.​

He has published several books on Islamic and Middle Eastern history.​

As the Middle East Studies Center director, he has encouraged collaboration between colleagues of multiple colleges and units on campus by hosting events covering issues ranging from migration to political violence to the role of the US president in Middle East Policy.

Dr. White has a global reputation as a cross-cultural immersion education leader known for her innovative teaching. ​

She has participated in more than 40 distinguished teaching invitations from around the world and led students across four continents and seven countries as the program director for 36 study abroad programs.​
She is the GSU CIBER Coordinator for Students’ Activities and Competitions, where she collaborates with the Institute of International Business in expanding Robinson’s global footprint. ​

She was instrumental in launching the core international business course for the Robinson College of Business; and taught the first Experimental section of BUSA 3000, Globalization and Business Practices.

Tonya Cook has over 25 years of event production and planning experience coordinating a diverse range of programs for the Georgia State community.

144,577 guests have attended the 1,026 cultural and educational programs she has planned during her almost 30-year tenure at the university.​

She is an inductee of Zeta Phi Beta Sorority’s Hall of Fame and Women Looking Ahead Magazine 100 List of Georgia’s Powerful & Influential Women (Non-profit and Diversity). ​

In May 2015, she received the Carl V. Patton President’s Award for Community Service and Social Justice Staff Award

Learn more about the Staff Award for Global Engagement

Dr. Cymbalyuk is a renowned neuroscientist who leads a study abroad program that involves hands-on project-based learning where students use computational and mathematical skills in an unfamiliar environment. The program takes place in Ukraine. ​Many students have praised the program for delivering a unforgettable cultural and educational experience.​

Elizabeth Perry exemplifies the idea of a global citizen because her contribution to her study abroad program and her continued commitment to Uganda. Perry has a passion for improving the life trajectory of vulnerable young people in Uganda, and an eagerness to welcome Ugandan’s and other Africans studying at Georgia State University.

Learn more about the Study Abroad Student of the Year Award

Amin Bayat Barooni was the founding president of the Persian Student Association, and is an active member of the International Student Association Council. He is an excellent graduate student showing broad achievement in coursework, teaching, and research.

Learn more about the International Graduate Student of the Year Award

Yuqi Chen is an exceptional, dedicated and determined student. Yuqi has continually impressed her professors and peer with her strong work ethic and commitment to being the best.

Learn more about the International Undergraduate Student of the Year Award

Award criteria
“Record of achievement and recognition for international work at Georgia State University and contributions to humanity, science, art, or human welfare have made a positive impact internationally”

Award criteria
“Contributions to humanity, science, art, or human welfare that have helped the citizens of their country and/or the global population, and life activities that reflect the importance of their education at Georgia State University”

Learn more about the Staff Award for Global Engagement

Learn more about the Study Abroad Student of the Year Award

International Graduate Student of the Year

Learn more about the International Graduate Student of the Year Award

International Undergraduate Student of the Year

Learn more about the International Undergraduate Student of the Year Award

International Graduate Student of the Year

International Undergraduate Student of the Year

Send this to a friend